Schenectady County Community College
JavaScript is disabled for your browser. Some features of this site may not work without it. 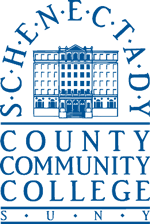 Located at the “Western Gateway” of Schenectady, N.Y., Schenectady County Community College was officially established in 1967 after a study made by a citizen’s committee showed a need for a community college in the county. Classes began in 1969 in the building that is now known as Elston Hall, the former Van Curler Hotel. Since then the SCCC campus has grown to five buildings, including a multi-purpose building that houses the Begley Library, The SCCC School of Music and the Carl B. Taylor Auditorium, the Center for Science and Technology, the Gateway Building and the Stockade Building. SCCC provides a great diversity of academic and career preparation programs, but is most well known for its superior Culinary Arts and Music departments.

Sub-communities within this community